The migraine headache is perhaps the best known special type of headache. A lot of things accompany this type of headache – all of them bad. Symptoms can include dizziness, visual problems, “spots” before the eyes, redness, swelling, tearing of the eyes, muscle contraction, irritability, nausea, vomiting, constipation, or diarrhea. These symptoms often arise before the headache hits. The headache itself may last for a few minutes to a few days, and the severity may range from minor discomfort to immobilizing agony. Migraine pain is most commonly felt in the temple, but it may be experienced anywhere in the head, face and neck.

Another variety of headache, closely related to the migraine, is the cluster headache. Attacks come on abruptly with intense, throbbing pain arising high in the nostril and spreading to behind the eye on the same side. Sometimes, the forehead is also affected. The attacks tend to occur from once to several times daily in clusters lasting weeks, or even months. Without apparent reason, the cluster subsides as quickly as it began. 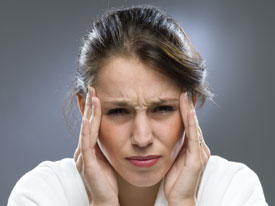 One more common type of headache is called a sinus headache. This frequently can present as atmospheric pressure changes occur if the individual has chronic inflammation in their sinuses cavities. This type of headache responds well to food sensitivity testing and dietary modification as well as in the moment of pain with laser therapies which can rapidly reduce the pressure in the sinuses.

One more that we see a lot of is the cervicogenic or “Tension type” headache which is caused by improper muscle firing patterns in the neck, head and shoulders. This type is the most common cause of head pain and comprises a full 80% of the people who experience headaches. This is another type that responds fabulously to laser therapy as well as proper oxygenation and magnesium.

So what puts the ache in headache? The pain-sensitive structures of the head are the culprits. These are the arteries of the brain and skull, the tissues surrounding the head, the veins, the dura mater covering over the brain, and certain nerves called cranial nerves. When these parts are inflamed, stretched, pulled, or under pressure, any type of headache may be caused. Migraine headaches can be classified into two types: classical and common.

The classical migraine is a headache that follows an aura or some type of spontaneous event such as numbness or tingling. The aura may be flashes of light, squiggly lines, or a halo effect. The common migraine does not have an aura associated with it. Most people who suffer from migraines suffer from common migraines – usually at a 3:1 ratio.

Approximately 28 million Americans suffer from migraines, and millions go without treatment. Scientists once thought migraines were caused by abnormally dilated or enlarged blood vessels. Now, new imaging devices have allowed them to watch brains during migraine attacks, and scientists are discovering that sufferers have abnormally excitable neurons or brain nerve cells.

The latest migraine research has yielded a mechanism called cortical spreading depression, or CSD. Prior to the onset of pain in a migraine, researchers have observed a sudden burst of cortical activity that occurs most commonly in the occipital lobes (back part of the brain). The occipital lobe will increase in frequency of firing, or have a burst of activity, and then there will be an episode of silence or depressed activity. The actual activity of the brain becomes depressed when compared to normal. The resulting pain comes from either the brain stem activation or from blood vessels inflamed by rapidly exchanging blood flow or both.

I take a different approach to the treatment and prevention of headaches and migraines. After a thorough neurological examination I determine which part of the nervous system is not functioning properly and if there is proper fuel delivery in the form of oxygen and glucose. In many headache and migraine patients I may find a high mesencephalic output. There are three parts to the brain stem: top, middle, and lower. The mesencephalon is the top part of the brain stem. A high output of the mesencephalon that is not dampened by the lower portions (the Pons and Medulla) will cause an increased pulse and heart rate, inability to sleep or waking up from fitful sleep, urinary tract infections, increase warmth or sweating, and sensitivity to light.

Often times in these patients poor muscular firing patterns have developed that lead to chronic spasms in the involuntary muscles of the neck and shoulders. For these patients utilizing laser therapies has been extremely successful at minimizing and sometimes removing one more trigger for their pain.

"I think I must have had headaches all of my life, but the first time I remember asking a doctor about them was when I was 28. I got through them the next 35 years with over the counter drugs, and then I developed a bleeding ulcer and couldn’t take the O.T.C. meds any longer. 20 years ago I began getting headaches about 2-3 hours after I went to sleep, so I started on a quest to find an answer. I have done many protocols – infusions, hormone therapy, food allergies, and several different kinds of pillows. Recently my primary doctor sent me to Dr. Marquis. 3 weeks ago I started laser treatments, I have only taken 5 Maxalt in that time (I was taking 3 per day). Only 3 of the headaches in the past 3 weeks were at night. This has been the best 3 weeks of my life in 20 years!"

There are metabolic triggers for head pain as well. A common one is the surprising array of food sensitivities. Many times the culprit can be foods that are considered “healthy”. I have seen just as many headaches caused by dairy and breads as I have food dyes and flavorings. The best way to identify the individual trigger is through comprehensive metabolic blood testing. This is an invaluable tool that we use for most chronic conditions and are able to provide beneficial life changing information once we gain the data.

No matter what the condition, it is imperative that the doctor performs a thorough and comprehensive exam to determine the exact nature of the patient’s condition.

If you would like to have more information or to set up a consultation and see how we can help you (or someone you know), give us a call to schedule an appointment to see if you are a candidate for these breakthrough procedures.